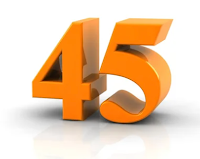 I was told today that the number 45 was ruined by Trump. I found this difficult to parse at first — to me, a number is not ruined just because it has an association with something bad. But I think that there is more to it than just that. The weather service predicts rain as she'll come home from work today. As the day started (just after midnight here), Russia began an invasion of Ukraine. It really isn't the greatest start to Katherine's 45th birthday for several reasons. (And she was so looking forward to any day that represented a multiple of 5, her favorite number.)

At first, I pointed out Grover Cleveland. Sure, Trump is widely said to be the "45th" president. But since Cleveland was both the 22nd and 24th president (being elected both just prior to and immediately after the little-talked-about Benjamin Harrison), that means that Trump is only the 44th person to take on the mantle of the presidency overall. 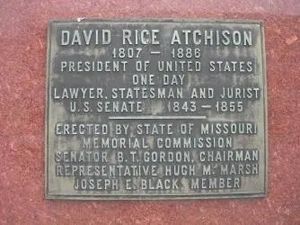 Then, to bolster my claim, I remember the old claim that one person was President temporarily. David Rice Atchison has a plaque affixed to a statue in Plattsburg, Missouri, which states: "President of United States One Day". This refers to March 4, 1849, when he was chosen as president pro tempore in the Senate where he resided. The Senate's own website tells the rest of the story:

> On March 2, 1849, Vice President George M. Dallas took leave of the Senate for the remainder of the session and the Senate elected Atchison as president pro tempore. ... Until the adoption of the Twentieth Amendment in 1933, presidential and congressional terms began and ended at noon on March 4. In 1849 March 4 fell on a Sunday. On the morning of March 4, President James Polk signed the last of the session’s legislation at the White House and at 6:30 a.m. recorded in his diary, “Thus closed my official term as President.” The Senate, having been in session all night, adjourned sine die at 7:00 a.m. President-elect Zachary Taylor, in observance of the Christian Sabbath, preferred not to conduct his inauguration on Sunday, March 4, and the ceremony was delayed until the next day. On Monday, March 5, Taylor took the oath of office on the Capitol’s east front portico and the transition of power was complete.

If the answer is yes, then, I at first thought, that might save the number 45. But then I realized that, if Athison had indeed served as president, then that would again make Trump the 45th person to take the role, since Cleveland served twice!

Thankfully, the answer is no. But I'm starting to suspect that this won't appease someone who feels that 45 is ruined anyway.

What, then, can rehabilitate 45? In the eyes of someone who loves the number 5, a strong contender is the fact that 45 is the conjectured value of the Ramsey number R(5,5). What is the least number number of guests that you must invite in order to ensure that at least five guests will know each other or at least five guests will not? Mathematicians are not sure, but we suspect it is 45.

To be slightly more general, R(m,n) gives an answer to the question of the least number of guests you'd need to invite in order to ensure that at least m guests know each other, or that at least n guests don't know each other. R(5,5) is known to be between 43 and 49 inclusive, and is conjectured to be 45. (See OEIS entry A120414 on Conjectured Ramsey Numbers R(n,n).) (To be even more general, R(m,n) refers to the idea that "complete disorder is impossible"; given a sufficiently large set, order will appear among its proper subsets. This is the first basic finding in Ramsey theory, which focuses on order amid disorder.)

Figuring out these numbers are deceptively difficult. Joel Spencer writes about Paul Erdős quip: if aliens come and demand to know the value of R(5,5) or they will destroy Earth, we should marshal all of our computers and mathematicians in an attempt to find the value. But if they demand to know R(6,6), we're better off attempting to destroy the aliens. In fact, Ramsey numbers appear to be difficult to calculate even with hypothetical quantum computers.

If 5 is a great number, and the most exciting parts of mathematics are the parts that lie just on our horizon, and if finding order within disorder is one of the enjoyable parts of being an artist, then R(5,5) must be a special case of representing something that might make up for Trump's taint. While we can't guarantee that it is 45 (some suspect 43 instead), it stands out as something that should make Katherine's 45th birthday special.

I'll close with a poem by Ernest Davis entitled The Ramsey Number R(5,5):

There are fans, among math buffs, of e and of π.
The ratio golden has legions who sigh,
In reverent awe at its beauty ideal.
Euler's γ has got its own quirky appeal.
But what makes me feel tingly, aroused, and alive
Is the mystical integer R(5,5). [Read "R of five five"]

Like Batman and Robin, its everyday face
Is a secret identity quite commonplace.
It's an integer, experts on graph theory state,
At least 43 and at most 48.
And combinatorists laboriously strive
To narrow the bounds known for R(5,5).

It's a quite element'ry idea to define
(Though I don't want to try that in meter and rhyme).
A short, simple program in Python or C
Has no trouble at all finding R(3,3)
But the stars in the sky will no longer survive
Ere it prints out the value of R(5,5).

Said Erdos: "If aliens from far outer space
Want to know, or they'll wipe out the whole human race
If we join all our forces, perhaps we'll contrive
To tell them the value of R(5,5).
But we'll certainly be in a hell of a fix
If they ask for the value of R(6,6)."