A Long History of Gaming

I no longer have any of the video games I grew up with. Some were gifted to others; some were lost as I moved from place to place. Still others may very well be hidden in an obscure box I haven't opened in a decade or so. I played countless games on the NES, Game Boy, SNES, GBA, Playstation, GameCube, PS2, DS, Wii, 3DS, Wii U, and Switch, let alone the hours played on Steam and GOG.

Today, Nintendo released an app that lets you go back to your old 3DS and Wii U gaming memories. It was fun to look back on where I spent most of my time. 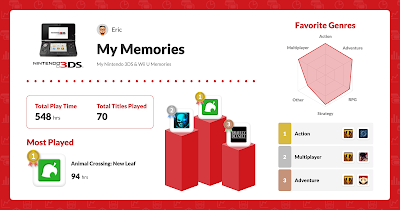 My 3DS gaming appears to have been dominated by single player games, with the exception of Tri Force Heroes, which I played through entirely with Katherine Hess and Jon Bockman. I apparently spent 94 hours in Animal Crossing alone, with another 61 hours in Bravely Default.

Not all of my 3DS memories are positive. There was a period of time where my personal life was very, very negative, and I used my 3DS as an escape mechanism — someplace I could go to avoid the harsh reality of life around me. Much of that experience occurred with Ghost Recon, which ended up with 82 hours of emotionless escape gameplay. I'm grateful that later games on the system represented much better times in my life, though apparently I didn't spend as much time with many of those later games as I did with Ghost Recon. My Wii U gaming experience is a surprise to me: I would have guessed that Splatoon would have topped this list. But instead the top two positions go to Advance Wars: AW2 received 124 hours of my time and AW1 113 hours. These were both nostalgia plays for me — I feel certain that I put even more hours into the original games, and probably an even greater amount into Advance Wars: Days of Ruin on the DS. Meanwhile, poor neglected Splatoon had only 80 hours listed. (If you count Splatoon 2, this number becomes much, much higher, but that's on the Switch.)

The Wii U was a system that I played often with siblings, but I ended up playing mostly on their Wii U system when I visited, rather than on my own. This means the number of hours associated with Smash Bros., Nintendo Land, and several other local multiplayer games are undercounted here. The big surprise for me was that Super Mario 3D World didn't make the top three played games. I feel like I spent entire months of my life working on Champion's Road with Katherine. (Later, on Switch, I replayed 3D World online with three friends and have almost 100% completed it (still missing a Champion's Road finish with Toad).) I also feel like Mario Kart 8 must be missing many of the hours I spent online playing it, but maybe I'm combining in my head the portion of plays I've done on the Switch instead.

When the Switch came out, everything changed for me. Breath of the Wild alone took up entire days of my life when it came out. I can recall playing late into the evening, still playing in the morning when my partner left for work, and not yet finishing my gaming session by the time she returned home. I was obsessed.

In 2019, I logged 706 hours in 62 games on Switch. Considering that I spent a lot of time on StarCraft and a number of Steam games, this is fairly significant. My most-played games were Civilization, Slay the Spire, and WarGroove.

The following year, I became deathly ill, and my game playing reduced commensurately. In 2020, I played 535 hours on Switch in 39 games. My most played titles were Animal Crossing (209 hours by itself in 2020!), Killer Queen Black, and Divinity: Original Sin 2.

2021 had another 546 hours played in 35 games. Surprisingly, Animal Crossing continued to top the list, with Monster Sanctuary and Bug Fables not far behind. Killer Queen Black did not make the top three most played on Switch, but this is probably because I bought it on Steam and Stadia, opting to play on those platforms instead.

Unfortunately, these lists don't take into account the time I spent in 2018 nor in 2022 so far on Switch. I don't see a way to look at past play history in the settings, though the most recent 20 games played do get listed under my play activity. A glance there shows Killer Queen Black at 155+ hours, Grandia HD Collection at 70+ hours, Animal Crossing at 285+ hours, Monster Train at 55+ hours, & Loop Hero at 50+ hours. These are just the games with 50+ hours that exist in the last 20 games I've booted up on the system — I won't bother going through the trouble of going the full list of all 246 games I have on Switch, as that would take far too long. I'll instead just wait for whenever Nintendo decides to create an app that will showcase my Switch gaming memories.