When Jasper was young, his nickname was Saucer Eyes. Such huge eyes on such a tiny kitty! His human family at the time was normal, I suppose, but not what I would call great. They bought him, presumably, from a breeder, as he is full blooded Himalayan. They had his front claws taken out, presumably because they valued their furniture more than his lack of suffering. But they were still loving, in their own way, welcoming him into their home.

Welcoming, that is, until, when Jasper was but two, it turned out that one of the human children turned out to be severely allergic to Jasper’s fur. He had been part of their loving home, but now he had to go. While they didn’t want to send him to a pound, they did start asking among friends and family who might be able to take him in. And so word got around, the sister of the human parent talked about it while doing hair at the salon, and Terry spoke up: “I know the perfect person who can take care of Jasper.”

Terry’s daughter, Katherine, soon met with Jasper. It was an uneasy meeting at first. Jasper does NOT like change. Upon seeing his new home, he hid and was not seen for days, only coming out for water, food, and the litter box. But Katherine was persistent, and after a few days of hiding in his new home, Jasper left a dead bug on the table where Katherine ate breakfast each morning. It was at this moment that she realized it was all going to work out.

Now, Jasper is 18 years old. He has slowed down. He doesn’t play with toys anymore. He’s been eating less. But he is still a beloved part of this family, and he always will be.

But cats’ lives are short. Jasper nears the end of his life. Today, as I write this, he is in the emergency room. They are doing blood work and giving an MRI. Afterward, we are not sure what will happen. He has not been well lately. His has lost proprioceptive knowledge of where his back feet are. He has lost enough muscle mass that he has very little energy. But worse: he has been acting confused. He has been acting out of character in terms of where he chooses to walk. He appears to have some sort of possible neurological issues. 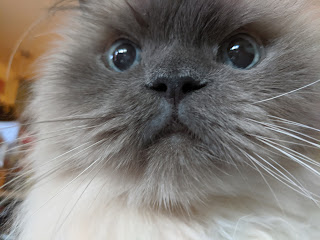 Soon, we will find out if these issues are temporary, possibly as side effects to a new medication that he has recently been put on, or if this is a newly arisen problem that we can’t really do that much to help about. If the former, then we will get more time with him. If the latter…

Jasper is a beloved member of our family. Grief haunts this moment of time, caught between the emotional turmoil of rushing to the hospital and when we learn what will happen next. For now, we are stuck in the car. Covid prevents us from being able to even be in the building where Jasper now is being examined. The wait is excruciating. 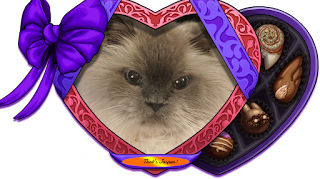 Last evening I slept while Katherine stayed up with Jasper. When I woke, she slept, and I took care of Jasper. Mostly this consisted of holding him, trying to encourage him to eat, allowing him to get down when he wanted. During my time with him, I let him walk around as he chose, even though it was strangely out of character for him. Eventually, he would run out of energy, and I would retrieve him, bringing him to my arms and giving him care. By the late morning, I gave him to Katherine, though she still slept, and let him rest in her arms. They stayed like this for several hours. But, after a time, he seemed uncomfortable, yet was too weak even to move himself to a better position. That’s when I helped to rearrange how he lay, and woke Katherine to let her know the issue. We called his petsitter, who asked us questions to see what we should do, and he started to open his mouth, breathing no longer solely through his nose. This was enough to cause us to get to the car and drive here, where we now wait.The wait. It rests uneasily. Not being able to even be in the building with him now… It hurts. The saying, I think, is that fear can be palpable; only now do I feel it in just this way. It is like a fog around me, obstructing not my movement nor my sight, but my… …? Obstructing my courage, maybe? It’s strange. I can _feel_ the fear trapping me in. But I don’t know how to convey it other than to say: my fear is palpable.

Soon, we will get a call. The doctor on the other end will just be a few meters away, inside the building in front of us. She will be with Jasper. She will tell us what will happen next. But for now I wait.

Edit a few hours later:
Jasper is dead. He died in our arms. I feel terrible.

This afternoon Eric and I held Jasper the cat as he passed away. For sixteen years, he has been my constant companion...