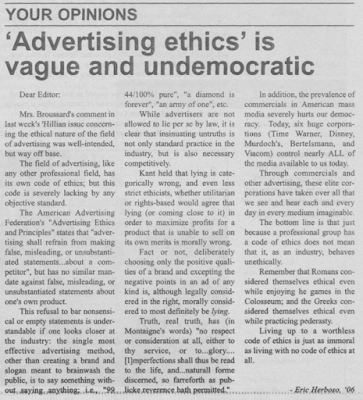 Posted by Eric Herboso at Thursday, September 22, 2005 No comments:

Worthy of Attention: Taking Stock of Reality: Back After Katrina

Note: Worthy of Attention was a column that I used to write in the online blog Panangelium.
Okay, so it's been a while since I posted. At least this time I have a (slightly more) valid excuse. Hurricane Katrina really screwed up a lot of my plans recently. Forcing its way hrough less than a week after school school began, I had not yet moved my stuff into my new dorm when I had to leave abruptly and catch a death cold of immense proportions. Even after power was restored and my sickness died down (thank god for a/c), I had lost two acquaintances to the storm's fury and two of my friends had severe flood damage in their home. The job I had agreed to take upon starting school again has been completely ignored so far; I won't even start until Monday of next week. Classes are severely behind, and class sizes are in some cases double what they were, because students from the destroyed campuses of Loyola and the like have transferred to Spring Hill College in an attempt to continue their education despite Katrina's wrath.

Writing this column does mean a great deal to me. It is, in my mind, a place where I may write about things that make people feel. And so I am quite glad to be back -- as odd as it may seem, writing these articles makes things seem more normal, even if they really aren't.

I have an article already written--it was finished before Katrina hit, actually--but I will wait until next week before posting it. It just doesn't seem appropriate, given that in every one of my classes, at least one person has lost their homes, or one of their family members' lives. For those of you who know of no one on the Gulf Coast, allow me to let you know that this hurricane has severely affected a great deal of people in very negative ways. But despite this, life goes on, and tragedy will pass in time.

Until next week, when I will present an argument in favor of infanticide, may you all live on, and enjoy life.

By all rights I shouldn't be. My plane almost crashed in D.C. -- I even made the nightly news that day. Some poor air traffic controller made a slight error and told our plane to land while there was still another plane on the runway. Our pilot started descent, noticed the other plane, and pulled up hard.

And then there's Katrina. My god, what a hurricane I wasn't as closely affected as most, but two of my friends lost their home, and two acquaintances that I've had lunch with on two separate occasions are now missing and presumed dead.

As for me, Katrina did nothing but cause my a/c to go out for a week -- but what a week it was. I was deathly ill that week, w/ a fever of 102 degrees, sometimes as high as 104 degrees. I was totally bedridden throughout the excessive non-air conditioned heat.

But now, I am well. I feel genuinely better. Things are starting to get back to normal. The day before yesterday. I finally started moving my things into my new dorm. Today will be Central Dogma's first movie night with the whole set-up, assuming my plans to ride w/ Kevin to pick up the rest of my stuff remain unaltered.

Stay tuned for more frequent updates now that I have a computer available in my room.
Posted by Eric Herboso at Friday, September 16, 2005 No comments: