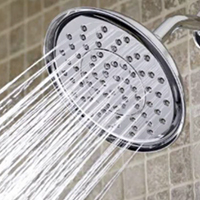 The shower felt so good. Warmth running down my skin. Nasal passages clearing up. I rested, allowing my body to take it all in.

The coughs from my cold still came every minute or so. My throat needed a rest. So I decided to gargle -- that's a thing that people do, right? To soothe one's throat? But this water wasn't coming from a small cup; it was raining down with force from above. Holding the water in my mouth proved to be too much, and I breathed a small amount in.

Instantaneously my body put up warning signals. I coughed immediately with full force, but nothing came out. Short of oxygen already from attempting to store water in my mouth for gargling, I coughed again, somehow pushing out a volume of air that nonetheless seemed to have no oxygen in it. I gasped, dropping nearly to my knees, the water from the showerhead patting my back steadily as I nearly keeled over, seemingly encouraging me to get it out of my lungs.

A third cough ensued, this time with less force because I hadn't time to breathe in. It had been over ten seconds since I last took a breath, and I could no longer think beyond what I might be able to do to get this water from my lungs.

I tore open the shower door, hovered over the toilet, and forced myself to throw up. Water came up, but only from my stomach, and the ensuing breath sounded as though the gargling had succeeded in my lungs instead of in my mouth. My torso convulsed and another spasm pushed out yet more from my stomach. It was flowing, certainly, but the water I needed to come up was in a different pipe. I squeezed my torso before the next expulsion and...

I could breathe again. I had to do it in-between throwing up everything I'd consumed earlier in the day, but at least I could breathe. Thinking back, it felt identical to all the other expulsions, yet it must have come at least partly from my lungs, because successful breathing resumed immediately afterward.

A few minutes later, I stepped in the shower, finished cleaning up, and took care of the now exceedingly wet bathroom floor. Never again will I attempt to gargle using water pushed down into my mouth from a full-force showerhead. This blog entry is now written, so I'm going to use the next couple of hours to contemplate on my life now.
Posted by Eric Herboso at Saturday, January 25, 2020