Why I Identify as Polyamorous 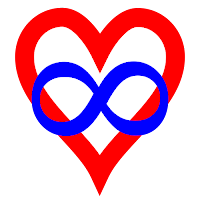 Like many members of minority communities, I often get challenged on my minority self-identification. Common retorts I hear upon my coming out as polyamorous are "sounds like you're pretty childish", "are you afraid of commitment?", "so you just enjoy cheating", or even the particularly hurtful "that's so unethical". Of course, not all people are like this; most people I meet are actually fairly understanding and accepting of it.

Yet I think it's time for me to write a blog post for those online readers who fall into the former category. Perhaps, as a reader who stumbled across this blog randomly, you might find yourself wondering what I mean by putting my polyamorous status up on the sidebar under my name. Maybe you think I am unethical, or possibly misguided. If you're thinking anything along that line, then this blog entry is for you.

Although the term polyamory sounds weird to anyone trained in Greek or Latin, the concept itself is really quite simple. It is a philosophy of multiple loves, and is usually associated with people whose romantic partners are not limited to a single person. There are several types of polyamorist groupings, including polyfidelity (such as closed triads), group marriages (as depicted in Stranger in a Strange Land), polygamy (as exemplified by LDS' "plural" marriage), and open relationships (indicating openness to new relationships at any time), among others. The reason there are so many types is because polyamory really refers to all forms of consensual non-monogamy.

Philosophically, I self-identify as polyamorous because I can make very little sense out of the premise that love can only occur once for each person. If you are a physicalist, then you must admit that love, spectacular though it might be, arises from physical phenomena. To think, then, that these phenomena cannot recur with a different person seems quite ludicrous on the face of it. Truly, polyamory should be the default position for anyone thinking clearly about the origins of the feelings of love itself.

Perhaps surprisingly, I think that it actually is the default position. For example, most people are easily willing to admit that widows can fall in love again. But if you honestly believe love can recur with a different person after your first love dies, then why could it not have occurred while your first love was still living? Time is not a relevant factor here; surely whether love occurs or not cannot be dependent upon time. So even though most people do not themselves recognize it, I think the vast majority of people are already philosophically dedicated to a polyamorist viewpoint, though only including multiple partners in time, not space. 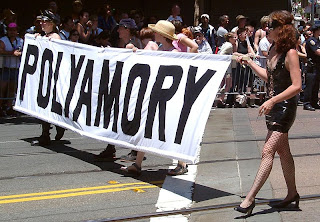 I should also point out that polyamory is not cheating; cheating involves deception and the violation of an agreement. Honesty and openness is required in order for polyamory to work. (Of course, there's nothing preventing cheating from occurring even in polyamorous relationships, but, predictably, it seems that less cheating occurs than in monogamous relationships.)

In fact, it is monogamy, not polyamory, which seems more ripe for unethical behavior. Lying and cheating are not uncommon among people who want a relationship to continue on one level, but have already started looking elsewhere for other levels. Serial monogamy, for example, is extremely common in today's culture. Yet it is hypocritical to pretend one is ethical merely by being against polyamory, and yet having no problem with dating multiple people in succession. Separating people out into chunks of time and ensuring none of the times overlap is not monogamy. It is only polyamory of a different sort. Plus, it involves lying, as serial monogamists tend to never indicate to their current partner that they fully intend to move on to another later on.

To top it all off, polyamorous individuals are far more capable of being honest with one another on relationship issues. Relationships can move from stages of lust to commitment without internal worry that the relationship is dying from a change in sexual activity. Commitment fears are eliminated since the institution of a relationship does not prevent further ones from starting. Asexual individuals can participate in romance without preventing their partner from experiencing sex. Sexually-needy people can satiate their needs without overwhelming a single partner. Best of all, polyamory reinforces the idea Bertrand Russell proposed in his Marriage and Morals, that laws and ideas about sex must be re-evaluated along with the times to better reflect only those moral judgments which have validity in society.

For more information about polyamory, I suggest looking into The Ethical Slut, r/polyamory, alt.polyamory, Polyamory in the News, & Polyamory on Facebook. Or, if you want to talk to someone in person, try googling your city along with the word "polyamory". You'll find that there are more of us around than you may have earlier realized. (c:
Posted by Eric Herboso at Sunday, April 01, 2012