'Septaquintaquinquecentennial' does not mean 175th

Note: This article was originally posted in The SpringHillian, a student-run newspaper at Spring Hill College. It ran in Volume 84 Issue 6.

So here I am, lugging along this styrofoam cup that I got at the 175th anniversary party to reuse it as often as possible before I throw it away, because if I throw it away now, I'll feel bad for the rest of the night due to my tree-hugging sensibilities. At this point, I'm hungry as hell after an agonizing thirty-minute wait to get food at the campus-wide party, I found my vegetarian options to be limited to tortilla chips and okra.

Eating my chips, cheese and lone tomato slice, I watched as those around me consume ham­burgers, hot dogs, chicken, corn dogs, and god knows what other death items that make me salivate just by writing about them. 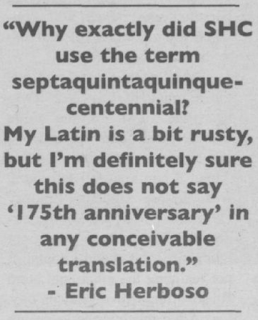 I guess I'm writing because the septaquintaquinquecentennial seemed like such a great idea, and was implemented really well, but it just seemed to completely ignore the (admittedly) small vegetarian population of Spring Hill College.

If integration and inclusion is so important to the college mission, then why aren't vegetarians thought of when planning these campus-wide events?And while I'm on the subject of questions that can't be answered, why exactly did SHC use the term septaquintaquinquecentennial?

Apparently, that's off by about 68 years and six and a half months. Of course, that's only the basest of translations in actu­ality, "septaquintaquinquecenten­nial" is utter nonsense, and would best be translated as "ugherkarphomen". But I guess it doesn't matter really. I think I'll just go out to Olive Garden or something and celebrate the school's anniversary in the way I know best: by myself. 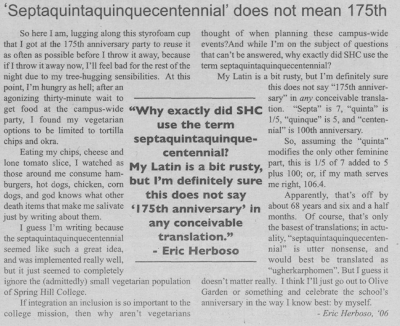