"Okay. I believe you. You clearly have access to far more advanced technology. Maybe you're not actually from the future, but you may as well have equivalent abilities from my perspective." They had passed the ad hoc informal test I'd quickly set up: finding the prime factors of a randomly generated very large composite — and then they followed it up by suggesting they predict the values of the next NIST Randomness Beacon pulse. It wasn't a good sign that they had chosen their own method, but it seemed reasonable as a quick proof of their capabilities. "You have my attention."

"Thank you. We were careful to pick you to reach out to, because we knew that you would take this seriously after we provided sufficient proof." Their appearance was normal, so much so that I almost thought it not worth thinking about. But that thought itself is worth recognizing. Whomever they are, they knew how to make themselves look unremarkable. "What you think you know about time travel is wrong. Neither the A- nor B- theory of time is correct. Other universes do exist, in a sense, but they do not have moral standing. P-zombies inhabit all other realities. This timeline is the only one with actual persons in it, and if we change this timeline then we affect what happens in the unique timeline that counts."

It's like they know exactly what kind of language to use to get across these ideas to me. A nagging feeling creeps up that they chose me more for their ability to convince me and get me up to speed quickly than for any other quality I might have. Here I am, the apparent chosen one, and it's only because I already know the shorthand for these philosophical ideas. Also: they'd better have damned good evidence for disqualifying so much of life from having moral standing.

"We know that you are skeptical of p-zombies. We do not have time to explain how we know what we know. Suffice it to say that you are best placed to affect this timeline anyway, so you may as well focus your efforts here." I wasn't sure that this made sense. Couldn't strong commitments affect…

"We have to be careful not to influence too much. It’s a precarious timeline we are on. Push too much in one direction or another, and it all comes tumbling down. Effective Altruism lies yet in its cradle; the key to figuring out AGI remains thankfully unthought of due to keeping a proportion of humanity in poverty; the dangers on every side of a multidimensional tightrope are balanced and must not be influenced. But, at the same time, we must know."

I don't know how to explain, but the look in their eyes as they said this had this feeling of steely determination. What once was unremarkable was now a clear drive: a purpose far beyond anything that I'd ever seen anyone have. I knew this even as I was trying to keep up with what was said. "You are trying to save the light of life? You're here to protect the timeline from some influence?"

"No. That part is done. We succeeded. The future is the Good Outcome. Better than you imagine. We passed all our trials, thanks in part most to luck, but also due to steady influence from what was once this timeline's future." We make it? They're saying we actually make it. I still don't have a lot of trust for what they say, but I can't help but feel my emotions surge as I catch up. "The timeline is stable, and we dare not touch it further. Such care has been taken to choose you, so that we do not ruin what has already been saved." Wait, what?

"Hold on. You're saying we're already on the good timeline, and that this timeline is special because only we have moral standing. And yet you're risking taking us off the path?"

"Yes. For your current values, this timeline already has all that we need; everything is the best that it can be, taking into account some sacrifices. But we must know." Again with the eyes. They're saying that our values do not align. I still don't trust them, but this is worse: I don't understand what they're saying to me. They're trying to say that they fixed the future, we all succeed, and yet they want something more?

"In our time, we are masters of our domain. We have the theoretical down pat, with our strongest thinkers in virtual space hard at work on the problem of entropy, which will affect our progeny eons in the future yet. There we expend most of our resources. Second is the hobby of many: exploring how we might save the Ancients by making small changes to the timeline — but this is never seriously done, because everything is so precarious. The Ancients must suffer small torments so that the future can be worthwhile." They pause, looking down. "I am of the third. We care about my contemporaries, those who are lost, never to be found. Those who left the cradle still count. We must know."

Slowly, they open a backpack that I don't remember being there only a moment ago. "You, in this time, are lost, too. So many persons, cruelly tortured, living lives of misery so the rich can eat their flesh. If we could, we would help — but we can't. It is too precarious." They retrieve what looks like a small ball from the backpack. "I regret to say that I am not here for you. I am here for those in my time who exist beyond my light cone. We want to know where they have gone. We want to know what chances they have. We want to know what it is like, there, in the great beyond. I am here to get what knowledge I can without influencing x-risks." Another pause as they seem to absentmindedly turn over the ball in their hand. "…without influencing s-risks."

This is why I am chosen: because I am unimportant. I will make no waves. They chose me because I might understand, but also because I do not matter. Risking the future is not worth choosing someone more capable. 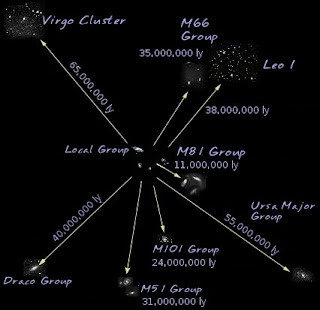 "When I come from, the local supercluster is all that we have. The expansion of the universe has pushed away everyone else. Our siblings who have left the cradle are no longer reachable, and time travel does not work in the way you expect. We do not have access to them. Our knowledge of other superclusters is taken from us, blanked from our records. We don't know what we don't know. But we must know. Are they okay? What mysteries do they experience? How different is their universe from ours? They have moral standing. They count. We must know."

"You're here for… the James Webb Space Telescope?" That doesn't make any sense. Is time travel only able to come here?

Why would this time be special? They are speaking as though… It must be trillions of years in the future. Yet they go back to when we are on just one planet? To look at distant objects? And isn't James Webb already aimed at distant objects? If they chose me because I'd understand, then they may have made a mistake. This doesn't make sense. "Why now? Why not look in a different era when they have more sophisticated technology?"

"You'd call it a singularity, though from our perspective it was just another revolution. What matters is that we are not allowed to be then. We can only reach out to now, in the decades prior. Here is where we can have influence without being countered."

This is too many impossible things before breakfast. It's too dissimilar. I… I just assumed that if this was the good timeline, then there would be no singularity soon. It's starting to seem like this being just doesn't share my values. Maybe they underwent some near-paradise hell, Friendship is Optimal style. Otherwise, why would…

"In my time, we are stranded on an island of influence, unable to know what our siblings accomplished in neighboring superclusters. We know nothing of what they found in these far off places. We know nothing of their trials. Of their successes. Of their failures. We have no access to any of what we need to know. The best we can do is this: coming now, to here, with you. The best we can do is to influence the direction of space exploration in the near term, without disturbing the precarious balance that leads to the Good Outcome." The ball seems to roll in their hand, without them maneuvering it. I suddenly realize that I don't know what color it is. I hadn't noticed its color this entire time. It… doesn't have a color.

"There you stand, Ancients of old, with full access to the universe writ large, and you squander every moment without looking to the deep space that only you have access to. We must know."

I can't take my eyes off the ball. It doesn't seem to be a sphere. Why did I call it a ball? Am I even thinking clearly about any of this?

"It is a calculated risk, talking with you now. We must not disturb the balance. But even though life is already saved, it also important to see what can only be seen in this era. We must influence where Webb is pointed. And I need your help to do it."
Posted by Eric Herboso at Sunday, September 18, 2022