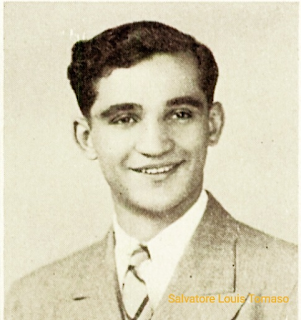 My view on my grandfather is rather warped. Around the time that I was born, Salvatore Louis "Ralph" Tomaso got into a rather serious car accident. Although he lived two additional decades, I always knew him to be in his bed, watching the history channel and resting all day nearly every day. Occasionally, he would get enough strength to go out into his workshop in the backyard, making all kinds of woodworking projects. Many of my oldest toys were made of wood, completely by his hand.

I say it was a warped view because I grew up with this arrangement as normal. Had you asked me back then, I would have claimed that it is normal to only have one grandfather and for grandfathers to spend all day in bed. (I also had a grandfather on my dad's side, but he was called "Abuelo" — I did not realize this was my other grandfather until I was much older.)

Papa had huge numbers of pillows on his bed. We would make forts there, draping the sheets to create secure rooms. We'd make ramps out of the pillow tops and run my cars across them. He'd teach me chess on that bed. We watched so many videos about military campaigns in World War II.

Occasionally, I'd be playing in the living room, perhaps a game of The Price is Right, and I'd see him come walking to the kitchen. He would get himself a snack of sardines and mini hot dogs in a can, then head back to his bedroom. I don't remember ever actually eating with him. He took his meals in that bedroom. I'm sure this isn't completely true — surely he came out occasionally to eat at the table, maybe on days when several family members were over for christmas or whatever. But my memory is hazy. I only ever remember him eating in his bedroom.

Every once in a while, we would go on an outing and he would sit in the passenger side seat. Often he would nap there during the ride, but if he stayed awake, he would make a very distinctive sound with his throat every once in a while. Years after he died, I one day in my thirties heard myself make the same sound involuntarily. It doesn't happen often, maybe every few months or so, but it is a distinctive clearing of the throat that reminds me of my grandfather every time I do it without thinking.

I missed so much of his life. He was in the Air Force, and he worked in the back of a C-130 aircraft. He would tell stories of how they played endless games of poker in the back of that plane as they flew rom place to place. I don't know the story of why he named his pet lhasa apsa Mae Ling, but it must have been after a friend he knew from his travels in the military. He was based all over the world. Panama. Okinawa. Near Iran. Countless places. He participated in a wedding in Iran once, going with the men while his wife, my grandmother, stayed with the women.

His mother, my great grandmother, insisted that his then-to-be-wife, my grandmother, learn how to make authentic Italian meals s that he would never starve on his travels. I remember eating so many Italian style meals at my grandparent's house, even though my grandmother (the cook) wasn't at all Italian.

He also had a pet parakeet, named Pretty Boy. Pretty Boy would repeat all kinds of tunes, so you could always tell what kinds of show my grandmother would watch in the living room based on what melodies Pretty Boy would play. He also spoke quite a few english phrases, though to him they were just more tunes. Pretty Boy lived in the porch, a covered, enclosed, and air conditioned area that apparently was a porch before it was turned into a new room. The actual porch opened up beyond even that, onto a large fenced backyard, filled with trees and lawn, a toolshed wired for electricity and filled with wood and tools and all kinds of knickknacks, and what used to be a pool — though I only ever remember it as a wooden deck in the shape of a pool, complete with place settings to eat outside among the many, many birdhouses that my grandfather would make and set up in the area. I can recall spending hours watching birds with my grandmother on that porch, looking through the Audubon's almanac to see what kinds of birds lived in the many birdhouses in that back lawn. And, beyond the fence, a row of fruit of trees, thoughtfully planted. I'm not sure that they were a part of my grandparent's property, being behind the fence line, but there was not other house nearby. Perhaps it was city land that was never parceled out. Regardless, apple and fruit trees lie in a line there, and I would climb them often. To the side a bit were huge patches of blackberries — I remember collecting all kinds of fruits and berries and bringing them back to my grandmother at certain times of year.

I see in myself qualities of my grandfather. I don't just mean my propensity to sleep — his mannerisms, his fascination with games, his drive to learn more via television — these are all things that I see in myself. Yet there is so much about him that I never learned because of my warped childhood view. There're so many periods of his life that I just never knew anything about. How did he react when he learned that his 23 year old son, Billy, died of illness, only a few months after his mother died of old age? My grandfather was only 34 years old then. Where was he? Did he take a leave from the military?

Where are all the stories of the times he spent in various countries around the world? Who was Mae Ling? Did he grow up in New Jersey as a child? Or New York City? (His mother came to NYC first, then moved to NJ, but I don't know the dates.) Who were his siblings? Why was I never introduced to any of them? Was he estranged from his family, or were we just living too far away?
In 1945, did my grandfather have something to do with the B-25 that hit the Empire State Building? I can't tell if his friends were involved in the accident, or if his family were affected, or what. But apparently some kind of connection exists, according to family records that I no longer have access to.
When my grandfather died, I attended his funeral. They asked if anyone wanted to come up to speak, so I did. I talked about the side of him that I knew. The person I'd spent so many hours with, mostly because he lived only a few houses down the street from me. I talked about pillow forts and racing small cars on his bed. After I sat down, no one else spoke about him. I remember thinking that what I had said seemed so very small — that so much more happened in his life and it wasn't fair that only I spoke about such a small part of his. I realize now that others didn't speak because they were grieving and felt unable to. But it still felt weird to me at the time. I was eighteen years old.
Posted by Eric Herboso at Saturday, August 06, 2022