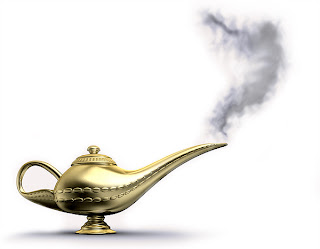 A genie arrives and offers to grant me three wishes. What should I wish for?

After long consideration, I've come up with the following:

I was initially unsure if this is the best way to go about this, but I thought I was at least coming close to the correct answer.

Whereas my series of wishes was aimed at getting me an infinite supply of wishes without screwing things up too badly, an alternative answer by Mestroyer is even better, because (s)he accomplishes the desired end result (that I never even bothered getting into) in a single wish:

"I wish for the result of the hypothetical [nonrelative] nth wish I would make if I was allowed to make n wishes in the limit as n went to infinity each time believing that the next wish would be my only one and all previous wishes would be reversed, or if that limit does not exist, pick n = busy beaver function of Graham's number [, except don't grant this wish if it would result in me wanting to kill myself or dying before I could consider the question]."

While my wish was aimed mostly at getting infinite wishes, Mestroyer cuts to the chase and goes after the end result of whatever infinite wishes would get her. She sets up a theoretical infinite supply of wishes for herself that would cause her to wish for the best thing she could conceive of, and whatever the last of these wishes would be is what she chooses as her one wish.

Presumably, in this hypothetical series of wishes, her first wish would be flawed in some way, to which the second wish would correct the situation. The third wish would correct whatever was missed in the second, and so on. Eventually, no further corrections would be needed (with any luck), and whatever this end result is is what Mestroyer is wishing for in a single wish. This eventual perfect state of affairs would presumably cause the hypothetical Mestroyer to wish for the status quo indefinitely — which is why I added the "nonrelative" to her wish, so that each subsequent wish would be for a specific state of affairs rather than a change to the current state of affairs. (Thereby making the limit an effective wish.)

The "except" part at the end was added by Mestroyer after further consideration to evade the possibility that the limit would end up in a state where she is dead, which is a likelier occurrence than you might at first think, especially when you consider how badly things can start to spiral if the wishes screw things up too much at first.

(Meanwhile, the "busy beaver function of Graham's number" part is just an arbitrarily large (!) number, presumably far enough along so that even if there is no limit, the wish chosen will still have had enough feedback to be sufficiently awesome.)

Note that Mestroyer does not correct for the idea that wishes might change her desires. If, for example, wish #300 was for her to "be happy", then maybe wishes #301 and above would not bother changing the world further, which is not our original intent. So maybe we should limit each wish from being able to change our motivations, in the same way Mestroyer limited each wish from creating her own death. But if we do this, then we are putting priority on our current desires over that of our possible future transhumanist desires — and surely we should know better than to do this. So I have no way of knowing how to correct for the "wish to be happy" problem while allowing the "transhumanist wish" to go through without failure.

After seeing Mestroyer's best formed wish, I realize that my initial attempt to answer the question of what to wish for was tremendously naive. The hard part isn't getting infinite wishes; it's figuring out what to wish for once you have them. While I still think Mestroyer's version has the problem of distinguishing between positive transhuman wishes and negative expectation-lowering wishes, I nevertheless consider it to be the best answer to the "what would you wish for" question that I have ever encountered.

Does anyone have a better idea than Mestroyer's? Or perhaps a method by which to improve Mestroyer's version?
Posted by Eric Herboso at Monday, September 10, 2012