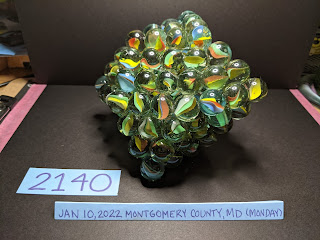 Katherine's latest art project involves looking at the number of covid cases in our county every other day and making something that has to do with that number. On Monday of this week, there were 2140 cases per 100,000 residents in Montgomery County (averaged over the previous seven days). Katherine discovered that this was a "cubic star number", which she felt had an interesting name, but for which there was not a good explanation online. (Seriously, try looking it up yourself. No one seems to have ever written about it much at all (other than the A051673 OEIS sequence), and there certainly aren't any pictures of what the accompanying shape would look like.) 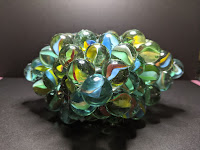 While making a three dimensional sculpture out of 2140 elements would be a little much for a series where she makes a new piece of art every other day, it did seem reasonable to make a much smaller cubic star number shape out of 120 marbles. So she did.

What you're seeing here is (as far as I can tell) the first picture of a cubic star number searchable on the internet. While diagrams of these may exist in yet-to-be-indexed books, I could not find such a picture in anything that refers to cubic star numbers (such as Gulliver's 2002 article Sequences from Arrays of Integers). 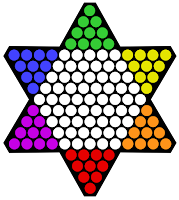 Star numbers are relatively well known. They're centered figurate numbers: you take one dot, then surround it with more dots in a certain shape, then surround that with dots, and so on, until you have a big shape of dots with a central dot in the middle. Gamers might recognize that a Chinese checkers board uses a star number shape of 121 spaces.

But I think things get even more interesting once you move into the third dimension. Instead of a square, you can use a cube; and, rather than making a stellated shape where a pyramid exists on every face of the square, you can merely place the pyramids on four of the sides, so that the front and back of the cube remain flat. In this way, you're extrapolating out what a two dimensional star number might look like if you literally pulled it out into a new dimension, but turned the triangles into pyramids while allowing the square to fill out a cube. 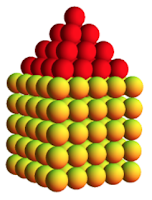 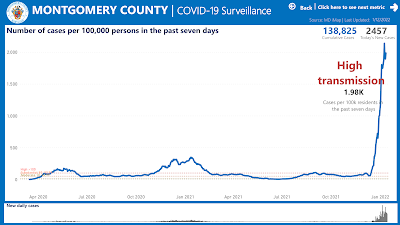 I'm fascinated by Katherine's choices in what to display in this regular art series. COVID-19 has gotten pretty bad here in Montgomery County, Maryland, since the Omicron strain took over. We reached highs of 300 cases on this graph back in 2020, and that was scary because anything above 100 was considered high and worthy of shutting down schools. Now we hover in the ~2k range and people are demanding that schools remain open. She's dealing with the strain via creating art — I have to admit that that's better than my current method of shutting down nearly entirely.

I'm looking forward to seeing what else Katherine comes up with. I was fascinated by her prime factorization series, and this current series on the integers of covid cases seems just as good. I just wish we didn't have to keep spreading covid in order to generate these depressing numbers and associated fascinating art.


Exploring the Integer of Seven Day Average Covid Cases per 100,000 People in my County Series. On Monday, January 10,...