We first met six months ago. He was friendly and cute; inquisitive and demanding. By our third meeting, he had me give him my full attention, playing with toys and petting him continuously. Soon afterward, when I became his housemate, I would feed him twice a day and sometimes share a bed with him. We interacted daily -- him by purring, me by talking. We had become not just housemates, but close friends. Family.

This morning, he woke me up by jumping atop me, and then curling up against my head. I stroked his fur before even opening my eyes. Two hours later, while at work, I received news: Jack had died.
It was a wholly unexpected death. He was at the vet getting his teeth cleaned. He never woke from the anesthesia.

A sudden death like this is especially upsetting. He was only six years old. Far too young. I already feel the lack of him in my life, and I only just got the news an hour ago.

It is harder, of course, for those who knew him longer than I. I was only the latest in an ever growing family who cared for him. Katherine is distraught. Many others have already expressed their deep sympathies. But I'm worried most about Jasper.

Jasper has been by Jack's side for years. They have not been apart for more than 24 hours in years. They have been constantly in each other's presence for 364 days each year since 2008. But Jasper is a cat, and so does not know English. He cannot view the body. I do not know how to explain to him that his adoptive brother has died.

This is a sad day for me. More so for Katherine. But for Jasper, it will be mostly confusing, I think. Which is a sad situation all its own.

And to Jack, whose consciousness has now passed, let me say that I am sorry your life has ended. Death is the most terrible of all evils. We must do what we can to combat this foe, and in your name I will take a small step by donating $250 to Vegan Outreach, one of the two most effective charities listed on Effective Animal Activism that help to avert the unnecessary suffering and death of non-human animals like Jack. According to the best research we have, this should help to alleviate between 15 and 25,000 years of nonhuman animal suffering. I trust Peter Hurford's estimate the most, which says that my $250 donation should result in approximately 17,280 total years of suffering averted.

In the meantime, I must comfort Katherine and try to get across what has happened to Jasper. This is not a fun day. 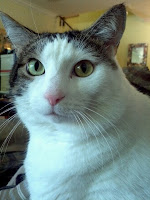 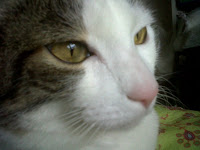 Goodbye, Jack. You are loved. You are family. <3 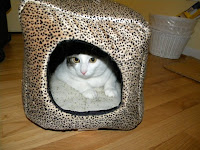